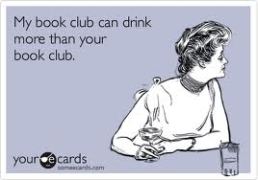 You might have noticed that I post quite a lot of book reviews.  I also post whether I have read the book as it was chosen as part of our E17 Book Club.  I think that this has provoked quite a lot of publicity for our book club as I have received many requests over the last year or so by people who would like to join.

We are obviously a rather literary lot in Walthamstow!

Turnover of members of our book club is rather low indeed – we ‘allowed’ a couple of newbies in when one member left in September, but the number of people asking to join and being turned away is growing weekly.

I am sure that there are probably others, and if you know of them please do let me know.

However, my point for this post was to suggest that maybe someone sets up another Book Club (or two!) in Walthamstow – there are obviously enough people interested to fill them (we have found that about 10 people at any one meeting is kind of the upper limit…and about 14 on the list tends to get 8-10 each meeting).

I have quite a large number of people ‘in my archives’, so, if anyone wanted to set something up, I would be happy to get back in touch with peopel that had contacted me in the past and asked to be put on our waiting list to see if they would like to join.

So, come on, is someone going to stand up to the mark and say “YES! *I* will start organising a new book club in Walthamstow!”.

(PS – we now have no idea who ‘runs’ our book club…once you get a few meetings out the way, the members kind of look after it as one.)

***UPDATE*** Someone has kindly taken on the mantle of setting up a new book club, which will meet once a month at The Chequers.  Let me know if you would like more details.

Also, as per Jenny’s comment below, there is a book club set up that meets in The Castle once a month!

We really, really are a well-read bunch in E17!

Ever since I have been with The Man, he has been trying to get me to read American Gods, but I have steadfastedly refused (I like finding little ways to annoy him).  Daft I guess, as Good Omens is one of my favourite books of all time, and I have read Neverwhere about 10 times over the years!

This year so the tenth anniversary of American Gods first being published, and we were also looking for a book to reading August for the E17 Book Club, so I thought I would suggest it as it has had such fantastic reviews all over the place – including a massive 4.05/5 on Goodreads (from more than 58k ratings) and inclusion in World Book Night’s Top 100 Most Popular Books.  The rest of the group agreed!

The story starts with Shadow, a convict who is just being released from prison.  All he wants to do is return to his beautiful wife Laura, and get on with carving a better life for them.  However, soon after receiving some disturbing news about Laura, his life seems to take a turn for the more surreal.

He meets Mr Wednesday, who could be a God (if he is to be believed) and is offered a job with some rather strange stipulations.  Feeling that he has nothing to lose, Shadow agrees to the terms of the verbal contract and begins a road trip across America with the enigmatic Wednesday, meeting his ever stranger cohorts on their way, coupled with the intensifying feeling that something bigger than all of them is really going down!

If the book had been about 150 pages shorter, I could have very easily said “I LOVED IT!” – end of story!  But I can actually say that I really enjoyed it.  Shadow was a fantastic character – I really felt for him, and he was extremely easy to like – and when you like a character (especially if they are the protagonist), it makes you buy into the story that much more.  Wednesday was also a fantastic character – extremely visual.

Gaiman is a real story-teller, you get lost in his descriptions and ideas.  You just have to let yourself be taken along by him to where he wants you to be!  There were so many strands to the narrative, so many little incidents that seemed unimportant at the time, and then later became key or even vice versa – whole beautifully written mini stories that were almost seperate from the main text, and were never again referred to within it!

However, there seemed to be a crucial incident about 3/4 of the way into the book that lost a lot of us in the group.  We almost all lost interest at that point, and some found it rather gruelling to get to the end after it.

But don’t let this put you off of reading it, it is a truly magical story, and certainly makes you think about religion, contemporary worship (ie, are we all praying at the altar of consumerism and media?) and the morals of mankind.  Well, it made ME think anyway.

I think we should go back to the old ways, make a few sacrifices. Build more beautiful temples. Have more swordfights. Regain some magic and mystery.

Last night, I was extremely proud to be part of my community.

For those who don’t know, Waltham Forest is one of only two London Boroughs without a cinema (the other being Lewisham, I believe).  We had a lovely cinema up to 8 years ago.  A beautiful art deco building where the Beatles and the Rolling Stones had played gigs and where Hitchcock had seen films as a boy.  It is a Grade II Listed Building and the last remaining British cinema with its original Christie organ in situ.

However, in 2003, the then EMD owned cinema was in rather a state of disrepair, seemed to have restrictions on films able to be shown, was starting to smell rather heavily of wee and was therefore not as well-frequented (a bit like the Rose & Crown before that got taken over!).  So, it was sold, to the United Church for the Kingdom of God.

Over the years, we have been told various tales of how the building is unsuitable to be re-opened as a cinema, but this has been challenged at every stage of the way.  For the past 8 years, UCKG have petitioned to change the building use to a place of worship.  Plans have even claimed to use the building as ‘a community meeting place’ with an apparent ability to show films.  Are the majority of local people going to go to church to watch The Fast & The Furious 5?

So, 18th May was a huge day for local residents, as it was Decision Day -the planning committee of local councillors was due to hear the arguments from both sides at a public meeting at the Town Hall and reject or accept the planning application from UCKG.

Being a proud member of the E17 ‘Awesomestow’ Twitterati, I had been really happy that so many of us were empassioned by the plight of the cinema, and arranged to meet up to show our support on the night.

When I got there though, there were even more familiar faces than I was expecting – I saw friends I know from the pub, members of my Book Club, neighbours, and even teachers from The Girl’s school.  Being able to mill around, mix in different circles and just recognise familiar faces in a huge crowd made me feel so ‘belonging’.

And there really was a huge crowd.  But from both sides.

With the meeting originally taking place in the Town Hall, the plan was to meet on the Town Hall steps.  However, the veune was changed, and the meeting took place in the nearby Assembly Rooms.  this meant that the ‘Cinema crowd’ were outside the Town Hall, and the UCKG were outside the Assembly Rooms.  And as they had generally had to come from further afield, they had a large crowd very early, which felt quite intimidating.  Our lot WALKED from home generally and arrived in dribs and drabs, slowly forming a HUGE crowd of support, which was incredible.

But of course, when the doors were opened, all the UCKG were already there, and got in first.  The hall takes over 1,000 people, but we were still left with about 2-300 people (guesstimate) outside, along with a couple of bagpipers, shouting our support through the windows to those within the meeting.  Luckily, the social bar just outside the building opened and helped fuel our morale as we were there for over TWO HOURS chanting, singing, waiting for the decision, and checking our phones and Twitter feeds to find out what was going on inside.

And the result was unanimous – 7-0 to reject the planning application.  It was a fantastic result for all involved (from our side of course!) and puts us one step closer to getting our cinema back.

After chanting “Save Our Cinema” for two hours, it was nice to chant “We’ve SAVED our cinema” and then the police moved in to hold us back as the UCKG people came out.Obviously they all had long journeys back home, buses to catch etc and so we were quite happy to shout”We live HERE, where d’YOU live?” for a while – at which point some of them seemed to want to have a dance-off.

Perhaps the greatest moment of the night was about 1,000 people waving “Byeeeeeeeee, cheerio, safe journey…” as they made their way home, and we all went to the pub.

Of course, UCKG still own the building, but there has been a Trust set up to try to raise the money needed to buy it back and refurbish AND the UCKG are extremely guilty of letting a listed building fall into a disgusting state of disrepair.  It has had illegal raves, has been flooded, has been boarded up and covered in scaffolding for years and they have done NOTHING to look after it.

And they must now know how opposed people are locally to yet another church (I believe we have over 230 already!!).

So, the first skirmish has been won – and now the battle proper shall commence.

And – last but not least, my favourite response from the UCKG

Tonight, I will be seeing another Book Club for the first time – behind my Reading Group’s back.

I am a little nervous, as this is ‘stranger danger’ as I will be meeting new people, and although according to Twitalyzer I am a ‘Social Butterfly’, meeting new people does always give me a case of the bowel cramps, so to speak.

I am really enjoying being part of the Walthamstow Library Reading Group – and I went along to our meeting on Tuesday and we had a brilliant discussion about That Old Ace In The Hole and I picked up my copy of our next book, which is Fasting, Feasting by Anita Desai (which I had never heard of).

However, before I had gone along to my first Reading Group meeting, I had in fact contacted someone from a group that meet at The Nags head in Walthamstow Village – but they break for the summer, and tonight was the first meeting they have had since.

So, I have convinced my friend to come along with me, and we have both read the book (luckily it was a very thin book – but also a very weird one…Andrew Kaufman’s ‘All My Friends Are Superheroes’ – I will review it later).  I am just crossing my fingers that a) other people actually turn up and b) that they’re lovely.

Is it wrong to belong to two groups?