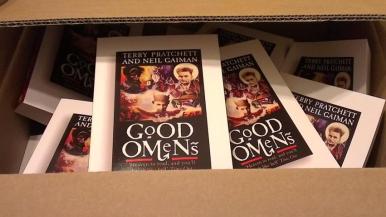 Last night I went to Walthamstow Library to pick up my box of 24 copies of Good Omens by Terry Pratchett and Neil Gaiman.  This was the book that was my first choice to give out for World Book Night on Monday (23rd April).

World Book Night is “…a celebration of reading and books which sees tens of thousands of passionate volunteers gift books in their communities to share their love of reading.”   1,000,000 books are given out in total – half of these are donated directly to hospitals, prisons and care homes, and the other half go voluntary ‘Givers’ to distribute in their communities.

The process started some months ago when the public was given their chance to vote for their favourite books.  This went down to a shortlist of 100, and then the 25 books with the most votes became this year’s giveaways.

Anywone is able to apply to be a Giver, and is asked to make a first, second and third choice of book that they would like to give, who they would give it to (or where they would hand out) and why they have chosen that book.  WBN say “The greatest reading journeys start when you put a book in to someone’s hand and say ‘this one’s amazing, you have to read it’.”

The 25 books chosen this year were:

I have only read 12 of these, which is probably what the point of world Book Night is!  I have already been given a copy of Someone Like You by Roald Dahl, which I must remember to reigster!

I gave away 10 copies last night at the E17 Supper Club, and will be giving the rest away over at The Rose & Crown on Monday.

Everyone needs to read Good Omens – I can’t believe it is more than 21 years old now.  I remember the first time I read it, I thought it was the funniest thing I had EVER read…and yet there’s a really great story running through it about nurture vs nature – can someone be BORN evil, or are they moulded that way by experience.  a bit like We Need To Talk About Kevin, but hilarious.  And good!

If anyone in Walthamstow does actually want a copy, let me know, and I’ll keep you one – and if anyone reading this HAS got one, remember to register your copy on the World Book Night site, and then pass it on to someone else to read once you’ve finished it.

I will be reading it again and reviewing it as it has been YEARS since I last picked up my wonderful copy that my New Zealand penfriend had signed by Terry Pratchett for me!

I love comments and will generally answer any that are left - so please do leave one! Cancel reply

If you would like me to review a book, film or restaurant, (or anything at all around E17!) or have any response to a review that I have posted, you can contact me on eastendlass@hotmail.co.uk - Sonia x

Recently in my head

What I intend to read at some point!

Been In My Head

Months in my head

Most viewed this week